The PERFform website has up-to-date images and descriptions of performances from our third tour around New Brunswick.       http://www.perfform.ca/ 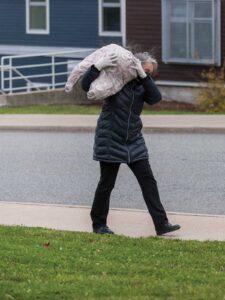 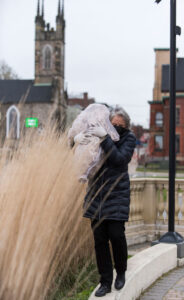 Performing Rituals of Place, A series of solitary performances bringing Bay of Fundy mud with me when travelling—the idea of carrying your home wherever you go. Reykjavìk, Iceland, 2015

I submerged a piece of canvas in the Scottish Sea, brought it home and re-submerged it in the Bay of Fundy to reconnect the separated continents, both with red mud cliffs.

Brooming hundreds of wooden letters within the gallery space referencing the many possibilities of language(s), of writing, of alphabets. The sound made while brooming spoke like a crowd’s buzz.

Each audience member was greeted with a HELLO in one of 55 memorized languages.

Clapping out a poem in Morse code and pulling out a braid of text from my belly pouch to continue the need to communicate, if only failing. Photographer: Todd Fraser.

In winter, 2017, Mathieu Léger and I did a nine-venue performance art tour of New Brunswick, presented by Galerie Sans Nom. You can view the documentation and read the blog at the link below. http://www.perfform.ca/2017/03/

A series of short and long actions about language as body, voice, space and movement from the personal perspective of being a mature woman. Each performance short builds into the next using chanting, song, extended vocal techniques, speech, actions from daily routines and life cycles where verbal and gestural languages intersect. From building a poem phonetically through repetitive song, reading a story backwards, thumping my chest to force sound out, bodily spelling words, telling a story with words and onomatopoeia effects, to dancing with paper cut-out words/sentences while singing.

Objects found while walking were transformed, given value through storytelling (verité and imagined) – written, spoken and sung.

Chanting + writing “remember” with red soil carried from the Tantramar marshes near the Bay of Fundy where I live. The performance was about carrying memories, being attached to the land, and not forgetting. The final gesture of the performance was eating the soil.

About how we inhabit our lives and about the particularity of place in our psyches, including video and spoken text with singing, sound making, and original soundtracks by composer Ian Crutchley. The whole reflects sensual, emotional and psychological experiences where verbal and gestural languages intersect in a spatial and sensual world of communication, inclusive of the non-human world. The performance’s allegorical format stretches over a twenty year period in six chapters, including both quirky and serious elements of life.

Calling out questions about promises between people while swinging in a gully with a cape (like a child). Innocence, hope, belief structures up in the air.

Flying into the Wind and 1+1=, Cabaret, Symposium of Art, Sackville, NB, 2010. Language as hidden, revealed, and communicated any way possible.